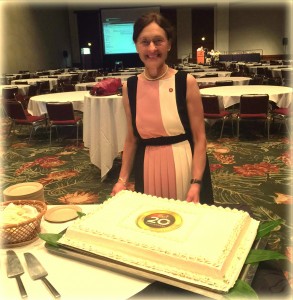 FACT is proud to announce its 20th year as the leading organization in standards setting and accreditation for cellular therapy, hematopoietic stem cell transplantation, and regenerative medicine. In addition to a successful cellular therapy inspection and accreditation workshop, quality boot camp, and two leadership courses at the 2016 BMT Tandem meetings, FACT kicked off its 20th anniversary and celebrated with numerous special events.

Throughout the BMT Tandem Meetings, FACT welcomed visitors to a lively exhibit booth.  Attendees who wore their commemorative FACT 20th anniversary pin received small gifts and were entered in a daily drawing.  Day one was themed Throwback Trivia Thursday. Attendees played FACT Jeopardy and entered to win a portable smart phone charger.  Day two was deemed FACT Fortune Friday.  Participants received a FACT fortune cookie and registered to win an Amazon TV Fire Stick.  On day 3, participants enjoyed taking selfies at the booth on Selfie Saturday, and entered to win a selfie stick of their own.  On the final day of the exhibit booth, Sunday Fun Day, all attendees who visited the booth enjoyed a package of Fun Dip Candy and entered to win a Microsoft Band 2 Activity Tracker. FACT thanks everyone who stopped by the exhibit booth and congratulates the lucky winners!

FACT also hosted a 20th Anniversary reception at the Hawaii Convention Center. Many FACT colleagues, volunteers, and friends enjoyed hors d’oeuvres and drinks as FACT celebrated two decades of working together in the BMT community to improve patient care and safety.  Guests enjoyed watching a short video highlighting FACT’s past 20 years, and saw some familiar faces who have been an integral part of FACT since its beginning.  Click on the gallery below to view full-size photos of the celebrations.

FACT will celebrate its anniversary throughout 2016 and plans to host several similar events at the ISCT North America Regional Meeting in Memphis, Tennessee.  Register for the Cellular Therapy and Cord Blood Inspection and Accreditation Workshop in Memphis on September 29, 2016!