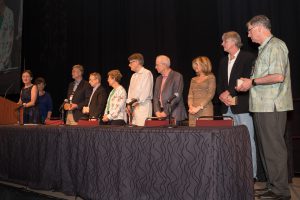 At the 2016 BMT Tandem Meetings CIBMTR General Assembly, the founding FACT Board Members were honored with an awards ceremony.

The ceremony opened with a brief history of FACT.  Outgoing FACT President, Dr. Helen Heslop, said that the process of drafting standards began in the early 1990s because it seemed likely that blood and marrow transplant laboratories were going to be subject to external accreditation. “ASBMT and ISCT were, at that time, very young professional organizations, but some prescient members of these societies recognized that it was important that transplant programs devise their own accreditation system and accredit themselves.  ASBMT and ISCT served as parents for FACT, which was formed as a standard setting and accrediting organization.”

“The initial board of highly committed volunteers invested much of their own time to develop standards with the goal of improving transplant outcomes,” said Dr. Heslop. “They not only had to convince the transplant community that they wanted to be accredited, but that they were willing to pay for the process.  Their success in doing this attests to their leadership skills and powers of persuasion.”

Dr. Phyllis Warkentin, founding FACT Board member and current Chief Medical Officer, summarized FACT’s accomplishments over the past two decades. “From the beginning, FACT’s success has depended upon the commitment of volunteer experts and their willingness to participate as peers to raise the quality across providers, to protect the research environment, and to advance the field.  FACT has accredited over 270 organizations in 23 countries on five continents. We collaborated internationally with JACIE and NetCord to publish 6 editions of hematopoietic cell therapy standards and 5 editions of cord blood banking standards. In 2015, we published the first edition of Common Standards, applicable to all cellular therapies in all phases of discovery, research, and development.”

Dr. Warkentin continued, “FACT was founded at the University of Nebraska Medical Center. Through the efforts of many, especially Dr. Jim Armitage, this affiliation has continued, and we thank the University for being our home institution for 20 years.”

“We honor the founding members of the FACT Board of Directors, whose vision created the premiere standards and accreditation body in cellular therapy.  Each of these individuals came to FACT with his or her own motivation, energy, concerns, resources, and abilities; and each left a unique mark,” said Dr. Warkentin. “The common focus, however, remains raising the quality of care for our patients.  Together, these 11 founders have served a total of 123 years as FACT Board members and officers, and each has also played a major role in leading accreditation planning and success at his or her own institution.”

Dr. Warkentin closed the ceremony by saying, “Forty people have served as members of the FACT Board of Directors.  This represents a significant contribution of time and talent to FACT, to our field, and to our patients. We have been entrusted with leadership positions, but each person has a unique story, and each has a unique role to play. All of us and all of you are important in the service to our patients.”