Clinical outcome analysis might have started gaining renewed attention in recent years, but FACT has required such analysis since its first Standards in 1996. This puts the HPC transplant field at an advantage as more stakeholders and patients are evaluating health care institutions in the context of actual clinical outcomes. Transplant programs that have voluntarily complied with FACT Standards over the years have outcome data that can be useful not just for retroactive investigations but for anticipating lower-than-expected outcomes in the future . . . and addressing them before undesirable outcome trends result.

When programs are required to submit a corrective action plan to address lower-than-expected one-year survival (per the FACT-JACIE Hematopoietic Cellular Therapy Standards), a common question asked of FACT is, “what time frame should my plan address?” The time frame should include current data, but should also go back in time far enough to detect any trends.

For example, autologous-only or non-U.S. programs often use the C.W. Bill Young Cell Transplantation Program’s U.S. Patient Survival Report or the Be the Match/NMDP Disease-Specific HCT Indications and Outcomes Data as comparative data sources. These reports are by year, but a single year is not long enough to adequately evaluate outcomes to detect problems.

Some allogeneic programs in the U.S. assume the time frame is limited to that used in the Transplant Center-Specific Survival Report published annually by the Center for International Blood and Marrow Transplant Research (CIBMTR). These time frames consist of three calendar years, with the last year being two years prior to report publication. The FACT Clinical Outcomes Improvement Committee does expect that these years be included; however, programs are not limited to this time frame. In fact, survival from before the time frame in the CIBMTR report will help programs detect when a declining trend began. Data from years following the CIBMTR report illustrate a complete picture of the current survival rates of the program, and can be used to determine effectiveness of corrective actions. Such data should readily be available from internal outcome analyses required by the Standards. They can also be obtained from CIBMTR’s Data Back to Centers (eDBtC) resource.

A FACT-accredited program shared a trending tool with FACT, and gave us permission to anonymously make it available to other programs on the FACT website. This Microsoft Excel-format Risk and Non-Risk Adjusted Survival Data and Box Graph has fields for entering figures from multiple CIBMTR reports over time (such as number of first-transplant patients, risk-adjusted survival, and endpoints of the expected range), plus non-risk adjusted one-year survival rates from internal data or eDBtC. After inputting this data, a graph on the second sheet is automatically populated.

An example is below. In this example, the program met clinical outcomes in both the 2013 and 2014 cohorts (2009-2011 and 2010-2012, respectively). However, the program’s survival rate declined. By the next report in 2015, the program did not meet expected one-year survival. As a program’s risk-adjusted actual survival declines and gets closer to the lower limit of the 95% confidence interval, it can begin evaluating causes of death of its patients and implementing corrective actions before one-year survival becomes lower than expected. 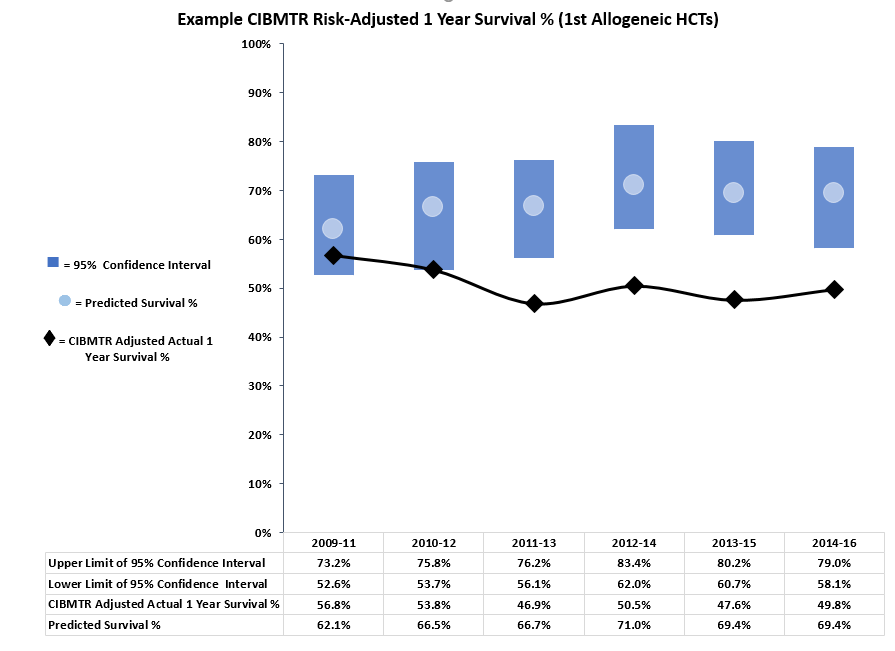 If survival rates are declining, questions a program may want to ask include:

Programs often fall in and out of expected survival ranges, and they should monitor how close their survival rate is to the lower limit. Avoid complacency just because survival was within the expected range; make a genuine effort to robustly complete required internal outcome analyses to detect problems before the CIBMTR report does. After all, we all know the real goal isn’t a score of “0” on the report. It is improving patient survival.